“It always rains on tents. Rainstorms will travel thousands of miles,
against prevailing winds for the opportunity to rain on a tent.”
– Dave Barry


Annual climate for Potten End, based on live data, is available here:


Whenever I get a chance to visit somewhere overseas I always like to find out what the weather is likely to be at the time I’m visiting. For anyone else who does the same, the graphs shown in this article will hopefully seem very familiar.

I have gathered together all of the information we’ve stored about the Potten End climate over the last few years (which amounts to over 24 million sets of measurements) and summarised it in these graphs. I hope you’ll find them interesting and useful.

It should be no real surprise to see the temperature graph below. Obviously it’s warmer in the summer and cooler in the winter.

Potten End compares well with the Met Office averages for our region with slightly lower highs and slightly higher lows.

February stands out as the most interesting month with both the incredible temperature of 24°C in 2010 and the coldest temperature we’ve ever recorded of -9.5°C in 2012. 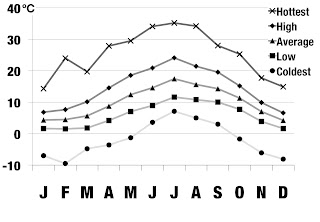 Before I calculated the monthly rainfall summary, I had assumed that the rain would be significantly less in the summer than in the winter. But the graph shows only a slight decline in rainfall over the middle part of the year.

I am amazed that April has the least amount of rain. Perhaps April showers don’t contain much water at all? I am not surprised that November is the wettest month. According to the Met Office, wind in the UK prevails from the south-west throughout the year. While this may be true for open, level locations, Potten End is on a hill and with various obstacles like tall trees and buildings, we can expect to be a little different.

In the chart below, the further the black area moves to the outside of the circle, the more often we have wind from that direction.

As we can see from the chart, the wind in Potten End prevails from a south easterly direction and we rarely get wind directly from the east and west. 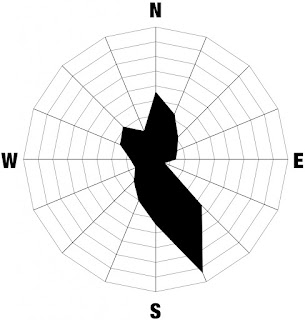 This article originally appeared in a slightly different form in
the December 2013/January 2014 edition of the Potten End Newsletter.